Home Cricket Why Deepak Hooda, a T20 natural, has the potential to book a...

A video was put up on the Sony India twitter feed of an interaction between Virat Kohli and Deepak Hooda near the boundary, on what seems a training day at Birmingham. Kohli gestures a lean-forward motion at the crease, indicating his left shoulder and head. Hooda is all eyes and ears. Now, in Kohli’s absence in the white-ball series in West Indies, Hooda is likely to get a longer run to show if he has the consistency. He showed his talent in the games he has got so far, and now against a better bowling attack, with a possible spot in the T20 World Cup squad up for grabs, it might well come down to how he performs in the extended series in the Caribbean. It might not be enough to stake a permanent claim, but it’s a golden chance to keep a couple of seniors on their toes, let alone other youngsters. Who knows what can happen if he has a bumper series.

Hooda’s batting style is where the Indian team is heading towards this T20 World Cup. For a country that birthed IPL, Indian batting has been ironically anachronistic. Now, forced by the rest of the world, they seem to have adopted a more aggressive approach. Even Rohit Sharma, who used to prefer soaking up a few deliveries, tried to hit out from the start. They had Rishabh Pant open. Hooda opened. Ishan Kishan with the licence to blast out. Sanju Samson doesn’t need any licence; he seems to know no other way but to let his bat flow. Even Kohli, who failed, showed intent to hit out in his brief knocks.

If Hooda can continue doing what he did, then it can’t hurt his chances. At least, it gives a great opportunity for the Indian think-tank to groom a youngster who seems aware of the format’s needs – like a young Suresh Raina seemed a natural fit in the ODIs and was groomed thus before the 2011 World Cup. Incidentally, after Hooda became the fourth Indian to hit an international T20 ton, Raina would tweet out: ‘welcome to the club’.

Hooda’s backstory has been well-documented on these pages before. In the last season or two, it was about his tiff with Krunal Pandya which resulted in a shift away from Baroda, then a sparkling IPL where a patch-up happened between two, that facilitated a return to Baroda.

In some ways, his batting captures the evolution in the modern T20. If one were to list out its mechanics – the various terms like ‘set-up at crease’, ‘shape’, ‘unweighting of bat’, ‘correct position’, Hooda’s style like Suryakumar Yadav’s, can be shown as an example. Not that there is an absence of a naturalness, but that constructed idea of modern-day T20 batting has seeped in so naturally. Hooda at times even resembles a version of a taller Suryakumar Yadav. Suryakumar comes across as more natural, but that could just be a matter of confidence. Perhaps, it’s best to explain the Hooda way using a few shots he struck during his T20 ton in Ireland. There was a shot in the eighth over of the innings off the seamer Conor Olphert.

It was a length delivery around the off stump line, and even as he lofted it on the up, the effort to tick off a few batting parameters was noticeable. The shape, for starters: the high left-elbow that hold the body position together even after the contact with the ball, firm upper body and uprightness in the follow-through.

Hooda, like the modern-day batsmen, likes to freeze that elbow at the end of the hand flow – not as a showmanship but to hold shape. Deepak Hooda plays a shot during a match against the Windies.

Hooda keeps pushing his hands through the shot, stretching it to its apogee, without relaxing till the end. Nothing goes limp: not the hands, not the upper body, not the head, and that shape is held.

Unlike say Shivam Dube, who was bracketed along with Hooda till the last season or two, Hooda has a way better pull shot option to the short ball. Dube’s bat-flows to full balls are impressively fluid but he is yet to clear doubts about the short ball and India can’t afford another young batsman with such worries (other is Shreyas Iyer, of course).

With the pull shot, too, Hooda’s technique reflects the method that we’ve been talking about. It’s not a mere letting go of oneself, like in the olden days, but a carefully thought-out crafted hitting. Hooda’s pull resembles the shot of the stickman in the video game Stick Cricket. His body too goes through similar motions – a sense of firmness about it. One can almost break it up at various points, deconstruct it, and re-assemble it – like an animation artist might.

Or in other words, Hooda’s, just like many batsmen, create violence scientifically. The joy isn’t akin to watching a Shahid Afridi wallop a ball but it’s more an appreciation of a skill carefully constructed – or so it appears.

The set-up at crease too is all about how one can get the maximum mileage out of a potentially attacking shot. A slight knee flex, the back feet point to point, and the front foot is already opened up, feet facing down the pitch. He can and does adjust it after the ball is delivered, but if it’s a short ball or one on the legs, he just opens that front foot wider (towards the leg side) and goes bang. Suryakumar is pretty similar. Deepak Hooda pulls a ball towards the boundary. (AP)

That approach also allows, just as it does to Suryakumar, the perfect base to play that half-pull half-swat both do superbly to backward square-leg. Suryakumar does it a tad better; both shuffle a touch to their right, and then crouch into an almost sitting position, and help the ball along up and over behind square on the leg side. As if they were flinging a towel, a man stole onto their left shoulder. It’s a cracking good shot – of imagination, dare, but also a carefully-constructed technique. Suryakumar almost hops to that back foot, shifting weight more decisively, and then holds his crouched position as the hands come across to do the rest. Like he did in that stunning first International six off Jofra Archer. 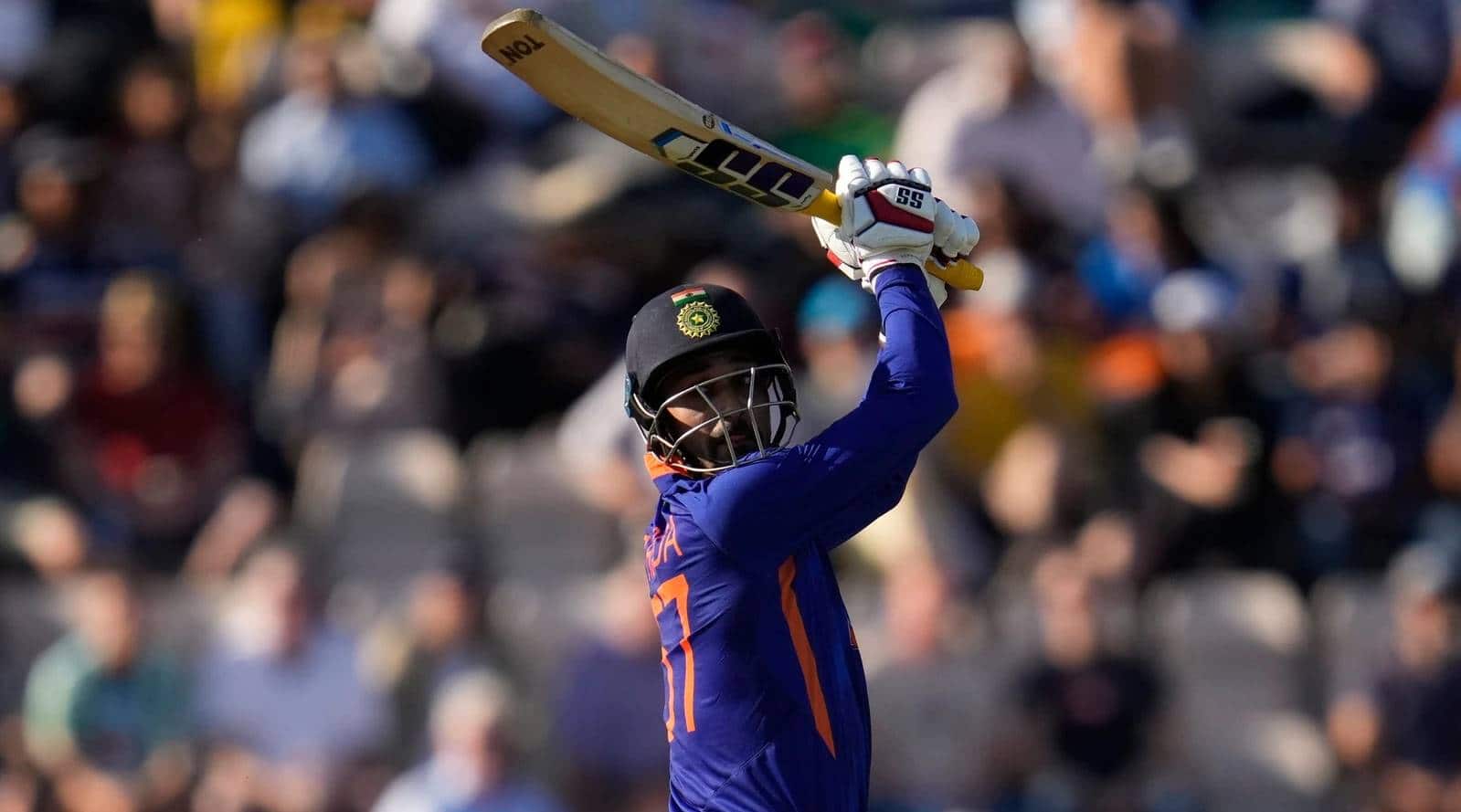 Their off-side hits over covers or the one over point is also pretty similar. In fact, the shot Hooda got out to after his ton could well have been played by Suryakumar. A tiny shuffle, and then down he went on his knee to a full ball well outside off, and let his hands flay at it, a whiplash of sorts, but there was a man prowling at deep point.

There were a few ticks visible in that Ireland series which seem to indicate where he will go with a shot. Occasionally, he does this threat of moving to the leg side and one can be assured that he would eventually move to his right to try to target an aerial hit over the off side. When he does to the spinners, he usually charges down the track. The performance analysts would have him covered by now, and this West Indies series should present a good indication of his confidence, skill, and evolution.

“If you don’t have any option, then why don’t you go there like a warrior. That’s how I think, and things turned in my way. I’m happy about that,” he would say about that hundred as an opener. “”I’ve never opened in an international game, but being a top-order batsman, you have to cope up to the challenges and you don’t have any option.” A warrior, then is how he sees it. It will need a lot of skills, game awareness, and a bit of that attitude if he wants to seize a world cup spot.