Uwe Seeler, who led West Germany to the 1966 World Cup final as captain of the national team, died on Thursday. He was 85.

Regarded as one of Germany’s best-ever players, Seeler was famous for his overhead kicks and ability to score goals from the unlikeliest of angles. He was also known for his humility and fairness, and respected for his never wavering loyalty to hometown club Hamburger SV.

German Chancellor Olaf Scholz said on Twitter that the country was mourning the passing of “our Uwe.”

“He was a role model for many, a football legend and of course an honorary citizen of Hamburg. I was permitted to give the after-dinner speech for his 80th birthday: ‘We actually all want to be like our Uwe – self-confident and modest.’ He will be missed,” Scholz wrote. 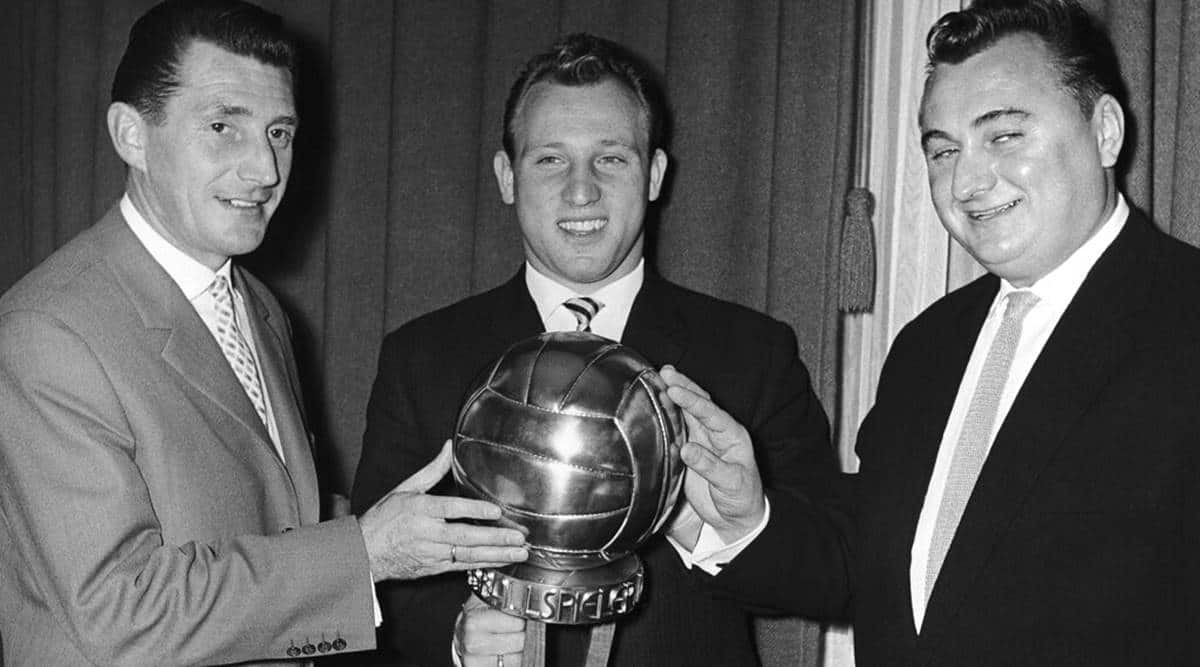 West German soccer star, center-forward of the German national team and the Hamburger SV Uwe Seeler, smiles while holding the trophy of the “Football player of the Year 1960” on Oct. 29, 1960 in Hamburg, Germany, awarded to him by former soccer player Fritz Walter, left and Jupp Posipal, right. (AP Photo/Peter Hillebrecht)

Seeler played for Hamburg from 1952-73, scoring 445 goals in 519 Oberliga and Bundesliga appearances for the team. He remains Hamburg’s record scorer in the Bundesliga with 137 goals. The club said he scored 507 goals in 587 competitive games for the club altogether.

Hamburg, which had been the only remaining team to have played every season in the Bundesliga since the league’s formation in 1963, was finally relegated to the second division in 2018.

The club on Thursday mourned the loss of a “legend.”

“Uwe Seeler stands for everything that characterizes a good person: down-to-earth, loyalty, joie de vivre, and he was always approachable. He is the epitome of HSV,” the club’s sports director Jonas Boldt said. “I personally have a special memory of our being together on his last birthday. He talked shop, asked about his HSV, gave me tips and a few jokes. We will never forget him and will always cherish him.”

Seeler scored 43 goals in 72 games for West Germany, finishing runner-up to England at the 1966 World Cup and with a third-place medal four years later in Mexico. He was part of the German team for 16 years. “While I was at four World Cups, I’d have liked to have won the title once. I didn’t have the luck,” Seeler said. “Still, everything was wonderful. I regret nothing.”

Brazil great Pele included Seeler in his list of the world’s greatest living players in 2004.

“His handling of the ball was perfect, his shot precise, and what really amazed me was his ability to head the ball,” Pele said.

Seeler received offers from clubs in Spain and Italy, most notably a huge offer from Inter Milan in 1961, but he opted to stay with Hamburg.

“If Uwe Seeler laced up his boots, then the opposing goalkeeper could dress up warmly and preferably put on a second pair of gloves because Seeler scored from everywhere and in every possible way. Whether overhead kicks, flying headers, shots from distance, volleys, lobs, opportunist strikes — he always found a way to get the ball over the line,” Hamburg wrote in special supplement to celebrate Seeler’s 80th birthday in 2016.

Seeler suffered from repeated health setbacks in recent years. In May 2020, he underwent an operation to repair a broken hip after a bad fall at home.

He lost hearing in his right ear and had problems with balance after a car accident in 2010. He also had a pacemaker fitted and had to have a tumor removed from his shoulder, news agency dpa reported.

Seeler was married to his wife, Ilka, for more than 60 years. They had three daughters. His grandson, Levin Öztunali, plays for Bundesliga club Union Berlin.

Seeler’s older brother, Dieter, also played for Hamburg. Their father, Erwin, worked on a barge in Hamburg’s port and was also known for playing soccer in the city.

Watch: Cheteshwar Pujara slams 22 runs in one over in Royal...