Joe Root is not England’s captain anymore, but he is still their talisman, the leading light showing the path forward. He, ably allied by Jonny Bairstow, who cracked his fourth hundred in as many Test matches, conceptualised England’s record chase in Test cricket without shedding a nerve, or seemingly, sweat.

As much as this Test was about the vindication of Bazball, the durability and sustenance of the philosophy against a perceivably lethal bowling firm, it was about Root, as fresh-faced as he burst into Test cricket, dilating the square light of greatness around him.

A triumph, hence of Bazballism as well as Rootism. In good times and bad England look for Root, and in bad times above all. In the 10-month disconnect of the first four Tests of the series and its final act, it’s often forgotten that Root was the single-most prominent protagonist. The prelude to the series was about England’s newfound radicalism, the bravado and belligerence, about Brendon McCullum and Ben Stokes, about the winds of changes that sifted through both teams, but in the end, Root turned out to be the firmest thread that binds the two disjointed instalments. When the Old Trafford Test was called off, Root was the top run-getter—595 in just innings. Rub off his hundreds, and England would have lost the series then and there. And fittingly, he struck the winning runs, with a reverse sweep, swelling his series tally to 737 at an average of 105, and a strike rate that syncs with Brendon McCullum’s attacking ideals.

It’s forgotten that in the first Test under McCullum, when things looked bleak in the 277 run-chase against New Zealand after Stokes and others had combusted, it was Root who hand-held the team to victory. Who knows what could have happened to euphoria over Bazballism if England had caved in that day.

In the end Bazballism won admirers, impressed critics and muted the still critiquing diatribe, but it was Root that set the stage for the beguiling drama to unfold. The man who both pulled the strings from behind the screen as well as the lead actor who put on a masterful show of class and craftsmanship. It seemed predestined that Root would salvage the series for England. For he was so desperate to draw the series after the meltdown in Oval, whereupon his captaincy was ripped apart. He eventually lost his captaincy, but there seemed an inner fire burning in him to help England win the Edgbaston Test and square the series. 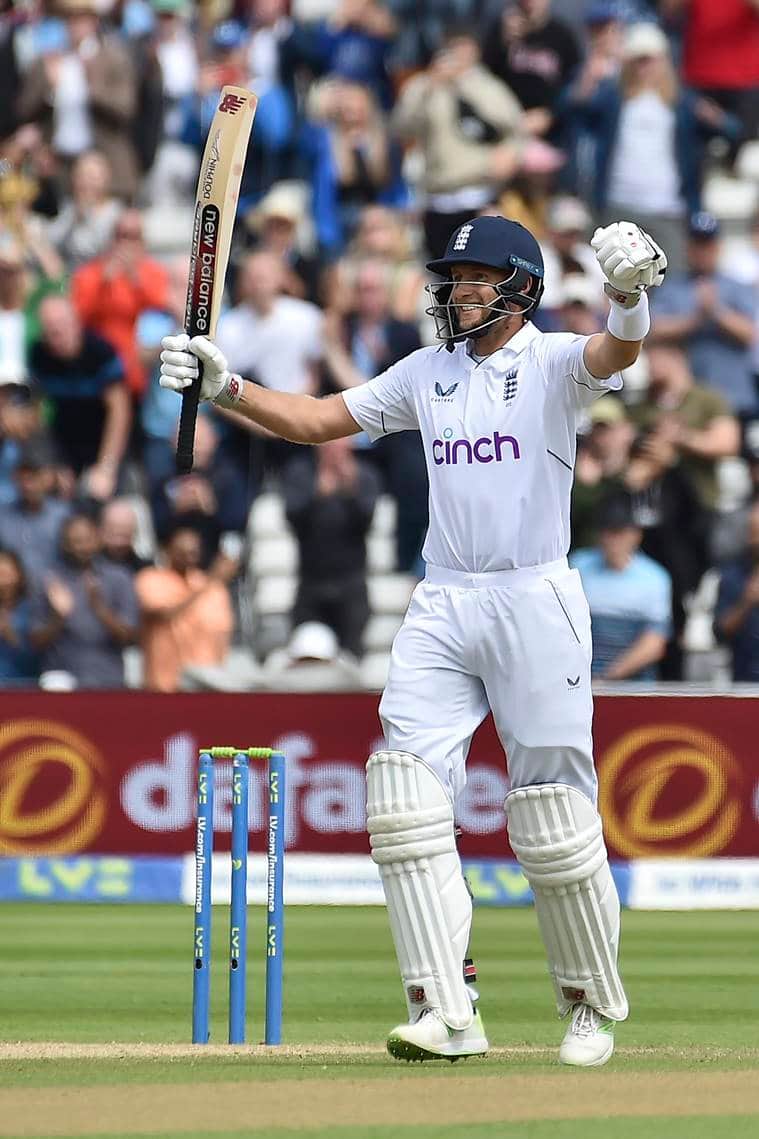 England’s Joe Root celebrates after his century during the fifth day of the fifth Test match between England and India at Edgbaston in Birmingham. (AP Photo/Rui Vieira)

There was a mountain to scale when he strode out. England had started off ambitiously, rollicked to 107, before losing a pair of wickets in a clutch. An uneasy whiff of implosion lurked. A raw sense of foreboding. There is so much history of collapses for English cricket and so much history of breakdown under Root’s captaincy. But in the middle, he bats with none of these baggage. In touch, in the divinest touch of his career, he flows as smoothly and serenely as a river.

He is made of such stern Yorkshire stuff that he does not melt. His batting might be anything but Geoff Boycott, his words are more measured too, but he is endowed with the same mental obduracy, the unflagging will to succeed. There was something about Root when he strode out to bat that foretold that he would stay till the end of the match. Not just the tides of prosperity he has been enjoying in the last two years, but something intangibly deeper that he would subdue everything that India’s bowlers would throw at him. That he’s the ringmaster of Birmingham.

If Bumrah cannot stop, perhaps no one could. That the Indian seam-maestro came not even remotely close to troubling him, let alone dismissing him captures the story of Root’s incredible mastery. If on Monday, he was reasonably restrained, scoring steadily as you would expect in a Test match, on Tuesday, he was effortlessly audacious; marvelling rather than scarring the Indian seamers. 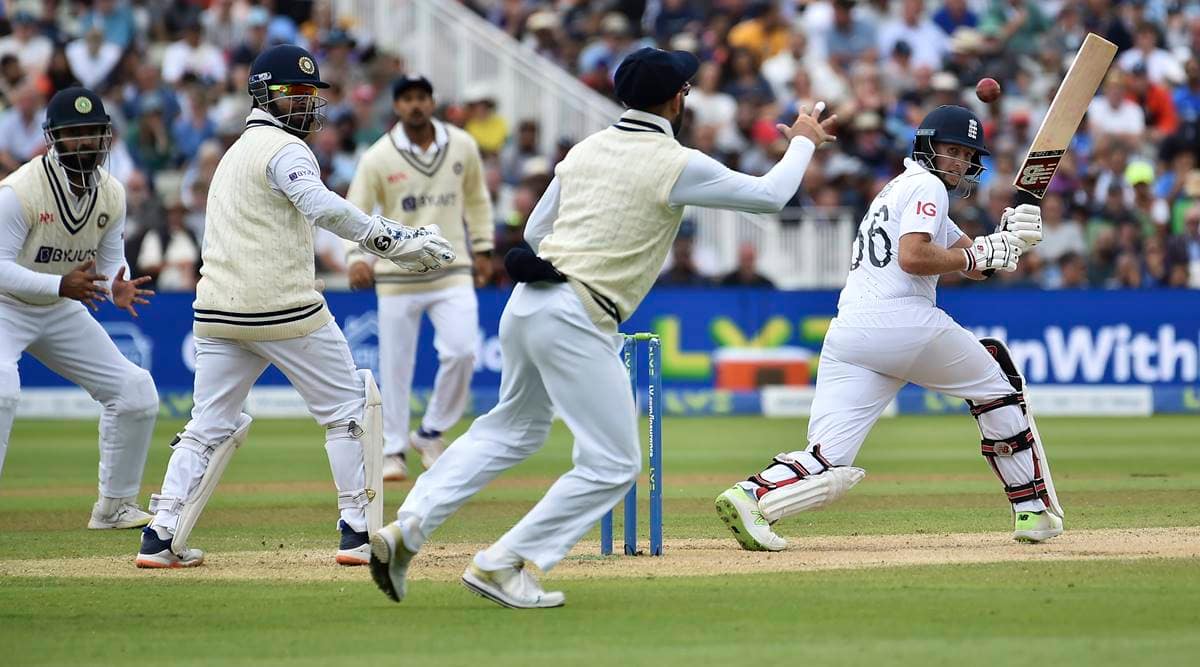 England’s Joe Root, right, plays a shot during the fifth Test match between England and India at Edgbaston in Birmingham. (AP Photo/Rui Vieira)

Though England required only 119 runs on a shirtfront, first sessions could be tricky. A heap of wickets and England could be nursing the scars of another caving in. But Root seemed utterly unbothered. He just wanted to show the world the celestial world of his batsmanship, the elusive chords he strums with the bat. The Rhapsody of Root.

None as melodious as his second four of the day—a cover-drive on the bended knees to Mohammed Shami, who in his follow-through glanced admiringly at Root who stood statuesque in his follow-through. If a picture indeed painted a thousand words, Root driving one the bended knee, spoke thousand more times about his batting than the absurd numbers he had racked up this series.

His batting is a self-contained world in itself. It could make you forget about the match, the time and day. The journey to 378 was not anxious, because Root’s batting sucked out all strains of anxiety. He stripped the suspense of a thriller.

From Fab Four to Fab One

There were more strokes that wowed and awed. Siraj was then square-driven for a three, before he ran Bumrah down the third-man region for a four. This smoothness of the shot hides the difficulty of execution, more so against as devious and quick a bowler as Bumrah. The set-up helps. He has an upright stance and a short backward press, which gets him into a position where he is utmost stable, where he can judge the length and decide his strokes. His hands are soft yet quick. The set-up is especially useful against a short-of-length peddler like Bumrah, in that he gets more time to play them on the back-foot and guide them over slips or third man. And when they bowl full to overcompensate, he strides out and drives them (sometimes on the bent knee) on the front-foot or flicks them.

So @root66‘s series stats are an absolute joke! 🐐

Post hundred, he raced along, as speedily as he has raced past his fab-four peers. So much so that it’s just the Fab One now. Just Root breathing a rarefied space unto himself, far from the sights of his chasing. Just as the batting standards of Kane Williamson and Virat Kohli has dropped, Steve Smith’s plateaued, Root has scaled a few rungs higher, a state where he bends the fate of the ball himself, where the bowler is just a prop-villain in a hero-centric mass movie. The reverse-scooped six off Shardul Thakur was merely a decoration, or a mere reminder that we are living in the age of Joe Root. And at the centre of New England is still the old hand. Root is no longer England’s captain, but still their talisman.

“ODI cricket is an art and still has the charm. I love playing it” – Shikhar Dhawan

“ODI cricket is an art and still has the charm. I...